I’m going to get to a lot of recommendations further down this page, but if I’m being honest:

OMG BUY THIS ONE

It’s a large-diaphragm mic, which means the part you speak/sing into captures more sound, it comes in a kit so you (theoretically) have everything you need, and it’s around $20, why are you even still reading this? Look at it! Just look at it! OMG buy it now! You can’t ask for a better starter mic, especially being an endorsed find by the fine mind behind CheapStudioSound.com — there is nothing cheaper with the quality of this puppy. Buy it. You will never regret having this in your arsenal.

A while back, a good friend who has done studio work for over a decade gave me a mic worth $180 because he knew I was trying to up my studio game. He did not know that I had purchased one of these a month prior, and I got to test them side-by-side. The differences are negligible. They’re there, but with some creative placement (i.e. aim about 30 degrees off-center),  I’m telling you: bang-for-your-buck, you cannot beat this mic.

I bought four of these for my church youth group. Myself and three backup singers all got to use these every week in a circular arrangement. When I mixed an aux line out, I realized listening to the recording that I didn’t mic the drums. I heard it because you could barely hear the drums, a full drumkit, with four of these mics facing away from the kit. These things pick up stage whispers in front of them, but a full drum kit barely registered because these were aimed properly. I’m telling you, these things are magic and you need at least one. Stop reading, start buying. Go go go go go!

What, you don’t think that’s pretty or something? You want a mic with a different look?

Man, I really wish they made the exact same sounding mic with a tapered head ’cause that looks pretty wicked OH WAIT THEY DO 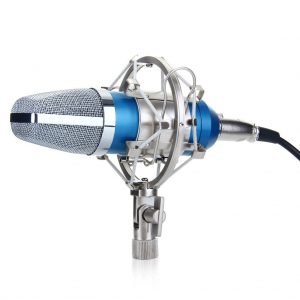 Check out the BM700 – literally the exact same capsule and diaphragm, just a different look because dang, son, your studio is about to look pimp.

The tapered head actually serves a bit of a purpose, here: I find with these mics, recording straight-on results in a little bit of a boomy sound, even with stepped back 6-8 inches with a pop filter. However, if you aim this microphone just a little off-center from your sound source (which is probably your mouth… maybe an amp, but let’s be honest, it’s your mouth), it suddenly sounds open and natural.

You can twist the mic sideways to achieve this effect, or… just aim it up or down until the taper of the mesh head is flat towards you. Ta-da, great sound.

And on the pricier end (of sub-$50 microphones, sheesh), there’s the BM8000. Yes, that’s eight thousand. Why on earth they didn’t call it the BM900, I’ll never know. Probably because they didn’t have me doing their marketing.

Side note to the manufacturers: guys, I’m available. Call me.

Look, these mics are a blast. You can’t beat the prices. You may not use them forever, but you’ll use them, and you’ll make sounds in them, and they’ll be your friends. And if you want to upgrade later, upgrade later. No one’s stopping you. But you’ll always have a great backup mic, and I promise you, they’re conversation starters. Mention the prices. Blow your friends’ minds. Enjoy yourself. Start with these.