Where to Aim Your Microphone

You know where to aim your microphone, right?

The obvious and no-nonsense answer is right at the source of the sound. If the sound is coming from this point, stick a mic right in front of it… obviously. It’s a no-brainer. Show a Neanderthal how a microphone works to make his voice louder and he’ll eventually stick it in front of a frog to see what happens. 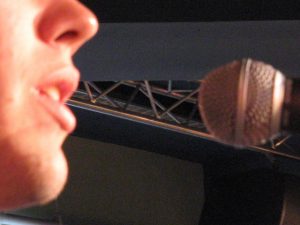 The problem is that studios, due to the nature of studio mics, tend to pick up a lot more sound than just what’s in front of the mic. With enough gain and an open studio door, I can hear my wife and her mother conversing in low tones in the kitchen (but don’t tell her that). Studio mics are sensitive, and that is to our advantage.

Of course, running your mics hot enough to hear a pin drop in the next room is going to give you a lot of background noise, so don’t do that in any professional production. But if you have a funky room that’s not exactly built for sound studio use, which is the situation most people in home studios find themselves in, then you can take advantage of the sounds of the room you’re in by recording off-axis.

What is off-axis recording?

What separates a studio mic from a live mic, in general, is that studio mics have larger diaphragms. The diaphragm is like a net that catches your sound. It does this by moving back and forth within a magnet, and moving the magnet creates a signal that sound boards and interfaces can use. All mics have diaphragms. It’s just that most live mics use a small diaphragm and shape the mic so that they pick up the sound directly in front of the diaphragm to catch the most sound right there. In a live performance environment, you don’t want a mic that’s going to pick up your vocals AND the vocals of the backup singer next to you AND the drums 12 feet behind you. Studio mics benefit from recording one thing at a time, when everything else around is silent. You can capture more of the room, more of the space, more of the natural feel of a voice in a room by making that diaphragm bigger and more sensitive.

However, having a large-diaphragm microphone can have its drawbacks: if you get too close to that sensitive net, a lot of sound is going to catch that diaphragm dead-on and flex a little more forcefully than you’d like. This is particularly bad with any ‘plosive’ sounds, your p’s and b’s, which are going to create a ‘pop’ in your sound as the magnet snaps instead of waves. A pop filter helps with this, of course, but why create the issue in the first place? 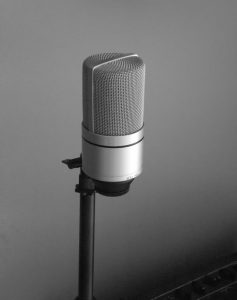 The other downside to recording close to a large diaphragm is that you add a lot of low resonance. Those mics will rumble if you let them. Most people back off the mic to get rid of some of that close resonance, but then you start playing a deadly game: the way you sound 3 inches from the mic is different than how you sound 5 inches from the mic, which is different than seven inches, which is different than a foot away… once you hear a recording that’s too close and you follow the general advice of “back up,” you start recording multiple takes at slightly different distances, and now you can’t piece them together to make a coherent narrative. Thankfully, there’s another way to control how that diaphragm picks you up while you stay close enough to keep your takes even: turn it a little bit.

Off-axis recording turns the micraway so that it captures your sound at an angle and can reflect a little, instead of catching the full force of your sound source (e.g. your bombastic voice).

I want to share a great example of this. A friend of mine who owns a pro studio upgraded his gear and picked up a $2000 microphone (which is insane but holy cripes it sounds clear as a bell), and he gifted me the Rode NT1-A that he started out with. So, naturally, the first thing I did was Google the Rode NT1-A for two reasons:

I was deeply curious. He just gave me a studio microphone. Did he just give me a sweet hookup or a lemon? Numbers are highly variable, I know, but mics that retail at once price are usually different than mics that retail at another price. What did I just get?

While sifting through reviews and other search results for this mic, I found a studio that did an in-depth review of the mic with multiple samples, and they talked in depth about recording off-axis with it. And of course, you’re able to replicate these experiments and results with ANY other large-diaphragm mic. The whole video is around 20 minutes, but you’ll start to find interesting bits about recording on-and-off axis around 2:53 — check it out.

So I know that the video was long, but hopefully you got to hear the difference between recording straight-on and recording a little off.

You can catch different timbres of any voice or instrument by knowing where to aim a microphone.

The key to this technique is to experiment relentlessly. Based on the room you’re recording in, you might find that there’s a great natural sound when you aim your mic 45-degrees off-axis and record facing the back wall but only two feet from the left wall. You might find that the funky corner makes things bounce in a cool way, which is great for voicing dragons (side note: if you get hired to voice dragons, please let me know). You may find that facing your mic directly away from the window but keeping in the middle of the room gives you the cleanest sound and plenty of room to record at a variety of angles. The point is to play with it, enjoy yourself, and get to know your sound by tinkering with who/where/how.

Use this technique in your studio and get some great recordings! Go do good work!